The Hydreon Rain Gauge Optical Sensing Technology overcomes many of the shortcomings of conventional tipping bucket rain gauges. The sensor works in mobile environments, there is no collecting funnel to clog with leaves, and the round shape makes it essentially self-cleaning. We have several model specific levels of accuracy, depending on the application requirements. The accurate RG-15 is designed to be a drop-in replacement for a conventional tipping bucket rain gauge in most installations. Since the lower cost RG-11 does not have a stated accuracy, it can replace a standard tipping bucket for less measurement critical situations where remote or other extreme conditions make it difficult or impossible to maintain a conventional system. The Rain Gauge counts the number and size of the drops hitting the sensing surface. The algorithms within the device interprets this data to produce the same sort of output produced by a tipping bucket style rain gauge. Pulsing the relay contacts closed when a set accumulation of water has been reached. The resolution may be set using the DIP switch to be a drop-in replacement for most tipping buckets. 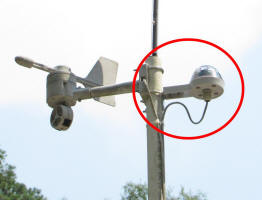 An RG-11 can measure rainfall in thousandths or even ten-thousands of an inch, where tipping buckets typically do not start indicating rainfall until after several hundredths of an inch have accumulated. 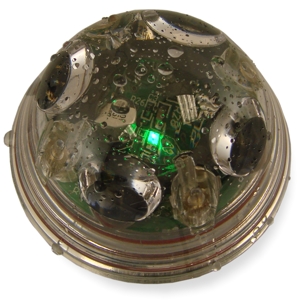 Features an LED that lights whenever the output is active, helping with troubleshooting.
A mechanical tipping bucket works by gathering water into a large funnel, and filling a mechanical bucket that tips when the weight of the water reaches a threshold. This approach is simple, accurate, fragile, and high-maintenance. If you jostle a tipping bucket it will register it as rain, making them unsuitable for mobile applications. Debris can clog the collection funnel. They should be cleaned periodically, because the water and dust leave residue behind on the moving part. They do not start to register until enough rain has gathered on the funnel and filled the bucket– typically several hundredths of an inch. In contrast, Hydreon Solid State Rain Gauges count individual droplets. Thus, they are a hundred times more sensitive than a typical tipping bucket. Further, the Solid State Rain Gauges contain no moving parts. They are unaffected by motion and the sensing surface is convex and self cleaning.