Not as accurate as a properly maintained Tipping Bucket, but a better choice for many applications. 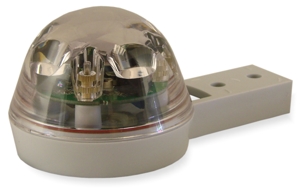 We do not guarantee or specify an accuracy for the RG-11, but these are the results we have seen for our three testing stations:

Cumulative Error for the three stations: -10% to -28%
Standard Deviation of error for each rain event: 36%

Data taken between October 2011 and November 2012.  Software revision – 12 (current is 16, but does not change accuracy).  Units for testing range between new and three years of weathering and wear, including tests with intentionally scuffed / excessively worn units.

Snow melt is not included in the totals.  Percent error for rain events is for events over 0.02" accumulation.  (Tipping bucket does not register below about 0.02")

There is not a clear correlation of any readily measurable parameter.  The biggest factor is surface condition.

The above graph show the rainfall accumulation of an RG-11 (green line) and a reference tipping bucket (red line), during a rainstorm at our headquarters in Minnesota on October 22, 2010.